One of the highlights of Grand Prix Race Weekend in Schenley Park is British Car Day, sponsored by the Western Pennsylvania Triumph Association (WPTA). It features 500 of England’s best sport and luxury automobiles. 2022 will mark the 41st year of this great event and the 34th year that it has taken place in conjunction with the PVGP in Schenley Park. During that time the WPTA has raised $177,500 for the Grand Prix charities!

Located in the middle of the golf course the British Car Show is the anchor of our International Car Show. British Car Day is the largest annual British-only car show in Pennsylvania whose proceeds have always been contributed to charity. The WPTA’s British Car Day was first held at Hartwood Acres from 1981 to 1986. In joining the Grand Prix in 1987, an immediate synergy was evident. That relationship has continued to be a huge success with each event complimenting the other. 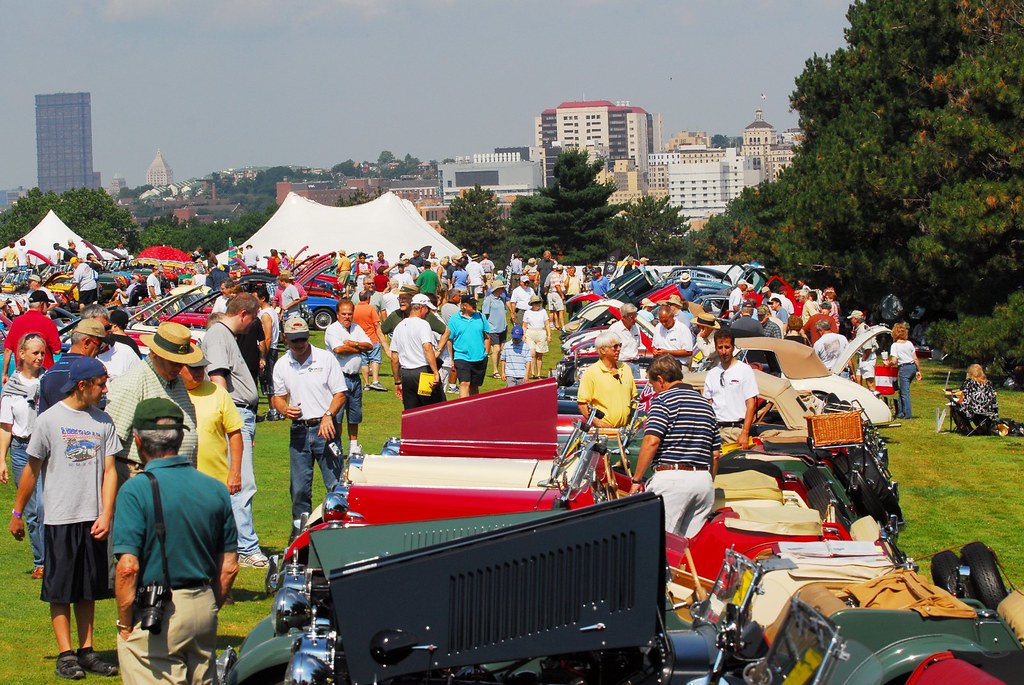 You must register directly with the Western Pennsylvania Triumph Association to participate in British Car Day. The fee is $30.00 for those that register before July 10 and includes a British Car Day dash plaque. After that date, all British Cars must register at the gate on Saturday morning, and the cost increases to $40.00. The WPTA requires specific car information for judging. Please do not use the PVGP online payment link.

British Cars are displayed on the 4th and 6th fairways of the golf course. Enter Schenley Park from the top of Schenley Drive you will be directed to turn left onto Darlington Road, then turn right onto East Circuit Road and enter the golf course through GATE F on your right. The display area starts on the fairway below the British Car Day tent. The WPTA was formed in 1977 by Ed Major and Ed Woods. Its original goal was the preservation, restoration and enjoyment of the Triumph TR2 and TR3 automobiles. Over the years the WPTA has opened its membership to all Triumphs, including the very last models imported to the US in 1981 – the TR8 and Spitfire. The WPTA currently boasts over 200 members, many of whom own British cars other than Triumphs but still enjoy the many activities of the WPTA. Over the years, British Car Day has enjoyed continued growth and popularity, becoming one of the major attractions of the PVGP weekend at Schenley Park. Participants come from as far away as Michigan, New Jersey, Maryland, Florida and Canada.  Although this show is traditionally known as British Car Day and held on Saturday it has been extended into Sunday as well. Any participant from Saturday can take part by bringing their dash card from Saturday and entering through Gate A on Schenley Drive.

It is the unique character of this event that allows it to continually attract such a large and diverse congregation of vehicles and owners. The attractive and scenic setting of the Schenley Park Golf Course, the relaxed atmosphere, and its proximity to a race featuring vehicles of similar heritage, all combine to attract a wide range of entrants. Participation of this scale, in combination with in-spirit donations of many entrants, has allowed British Car Day to directly contribute generously to our charities. The Grand Prix is grateful to the WPTA for their immense contributions to help establish and grow our International Car Show – donating $185,000 through 2022.

Be sure to visit the British Car Day tent at Schenley Park to find out more about how to join the WPTA and or the club representing your favorite Marque. Visit their website. For more details please contact the Western Pennsylvania Triumph Club directly: Dexter Stoltz