Plan to attend the 40th annual Pittsburgh Vintage Grand Prix with ARPCA.  Porsche is this year’s Marque of the Year.  Join hundreds of club members and guests from other regions as we gather on “Porsche Field” in Schenley Park to enjoy fine automotive culture, vintage races and the camaraderie that defines PVGP weekend.  The Pittsburgh Vintage Grand Prix is the club’s largest fundraiser of the year with proceeds donated through the PVGP charities.

This year promises to be an outstanding event featuring a multitude of Porsche Club and PVGP events that span 10 days!  The club’s PVGP Committee is utilizing a streamlined check-in process where attendees register through Motorsport Registration (MSR) and receive an email from PVGP_Reg@arpca.com with a dash plaque and QR code “ticket” as attachments.  As members drive up to the Porsche Field, they will scan the QR code and have your wrist bands, raffle ticket, and PVGP program pre-staged at the Registration tent. You must Pre-Register to guarantee a spot in Porsche Field.  Parking is limited cars.  With increasing attendance from across the country and large contingent from the Chicago Region this year, space is limited.

Pitt Race Historics and Tailgate (PHAT Saturday) – Cheer on twelve of our Porsche Club drivers as they compete in wide-open, wheel-to-wheel racing during the PVGP Historics at Pitt Race.   Join the ARPCA Tailgate Party featuring a catered lunch, dining tents, soft drinks, and Porsche car show.  Mingle amongst the cars and drivers in the expansive paddock and watch the vintage races from multiple venues.  Feel the thrill of racing first-hand by donating to the PVGP charity and experience a lap on the track in a Porsche racecar with one of our drivers.
$30 per person.  Includes catered lunch, dining tents, soft drinks, Porsche car show, and access to the paddock area. Does not include gate entry that can be purchased that day for $20/person. Kids under 12 are free.

Pre-PVGP Driving Tour – The ARPCA Driving Tour will start from the Willow Restaurant parking area, the location of our PVGP Welcome and Kick-Off Party. Mandatory Driver’s meeting starts at 12:45 p.m. First car off at 1:00 p.m.  Come early and meet for lunch!

International Car Show at Schenley Park – over 3000 cars on display covering marques from around the world. Vintage racing on the streets in Schenley Park. For Porsche Field patrons, Saturday and Sunday maintain the same high-quality amenities as previous years to include a catered lunch from Mission BBQ, Dining and Registration tents replete with linen tablecloths, cooling fans, and unlimited non-alcoholic beverages, High-Value Raffle Prizes, and People’s Choice Awards.

Porsches will be on the track all weekend, racing in the Under 2 Liter and Over 2 Liter Groups.

Registration closes July 11th at 11:59PM. No Refunds for any reason, including inclement weather, will be issued after July 11, 2022 as this is a charitable event and your fees are donations.

In 2020, the Allegheny Region of the Porsche Club of America took a leading role in the Pittsburgh Vintage Grand Prix’s efforts to raise funds for our charities”. Because of the COVID-19 Pandemic, the annual 10-day PVGP was canceled. Instead, the PVGP announced the organization would engage in a “Shifting Gears” campaign for the remainder of the year to raise money for its charities. Local car clubs and supporters staged 26 events that allowed them to safely be together and enjoy meeting with their cars.”

Ed Rice and the Porsche Club raised $6,100 with Parade Laps in Schenley Park on Sunday, July 26, the normally scheduled Race Day. “The impromptu event was a stunning success,” according to Ed Rice, president of the Allegheny Region Porsche Club. “I was in a melancholy mood when the event was canceled and I just didn’t want to sit around and do nothing that weekend. Then I thought, what the heck, every year in the days before Race Weekend in Schenley Park I drive the racecourse to get into the vibe of the PVGP.”

Read the full details in the September issue of Rundschau – the club’s newsletter. 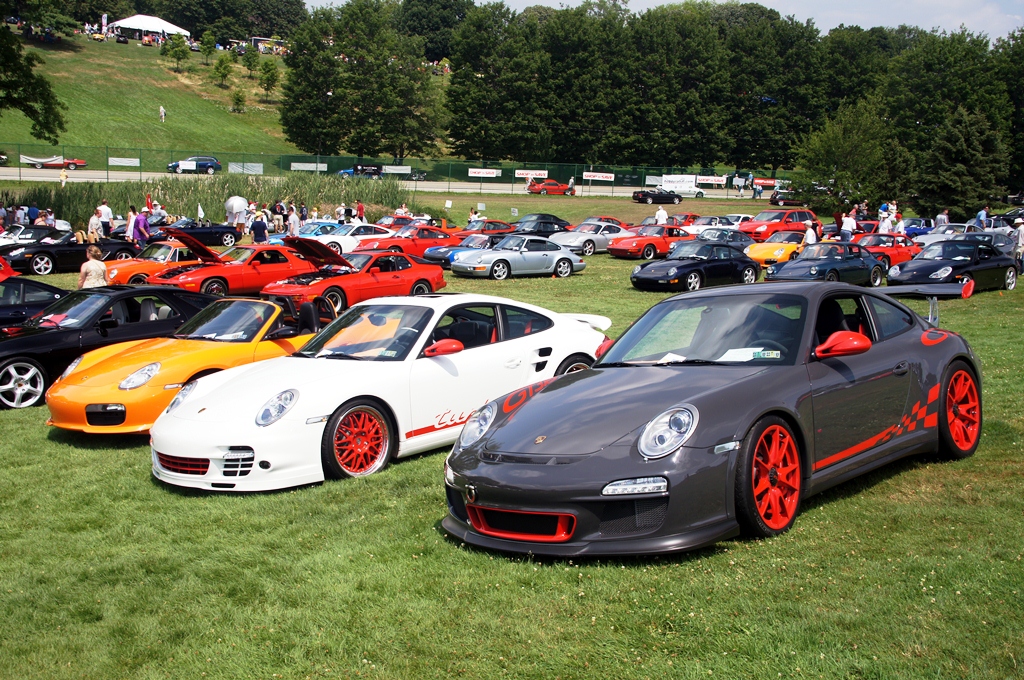 Attend one of the most spectacular vintage races in the world – and Party ARPCA style! The PVGP is the Club’s biggest annual event. Join hundreds of club members, guests from other regions, and friends as they gather on the lawn at Schenley Park to enjoy their cars, races, and above all, the camaraderie that has grown over the years. On March 25, 1961, 31 Porsche owners and P.C.A. members gathered at McSorley’s Restaurant in the North Hills of Pittsburgh to form their own P. C. A. Chapter. Visit the Allegheny Region’s website to learn more about their history. Porsche was the Marque of the Year in 1994 and 2002, each time they set a record for charitable funds raised by the marque including 2011 when $73,500 was raised from the Marque and $200,000 was split between our charities.