Vintage Indy in the Park Was a Blast! July 30, 2021 – The Vintage Indy in the Park turned out to be all that was hoped for…and more. Ten historic cars that raced at the Indianapolis 500 were in Pittsburgh this past weekend to thrill 100,000 fans and take exhibition laps through the city streets! Many thanks to the Bobby Rahal Automotive Group, Hagerty Motorsports and Vintage Indy for making this possible.

Vintage Indy™️
The Vintage Indy™️ is dedicated to the history and preservation of Indianapolis Championship Cars from 1911 through 2001. With the collective efforts of enthusiasts, specialists, and professionals, the goal is to ensure that these cars are more broadly appreciated and their history correctly preserved for future generations. Vintage Indy represents each individual car’s carefully and accurately documented legacy assembled from museums, collections, and individual owners of “The Greatest Cars in Racing”. Michael Lashmett President/Founder Vintage Indy™️ was quite pleased saying “the event was a first for us and the organization was second to none. Over 100,000 fans attended with thousands coming through the paddock. Our drivers reported that never had they been told by so many, “thank you for bringing these beautiful and historic machines to Pittsburgh!” It was the first time ever for vintage Indy cars at the PVGP. The city and Schenley Park is a beautiful setting for an event of this caliber. Our participants can now brag they have experienced and survived “The Serpertine at Schenley!” Splendid weekend, with hats off to organizers Daniel DelBianco, John Bechtol and Eric Zagrocki. We hope to be invited back again.” 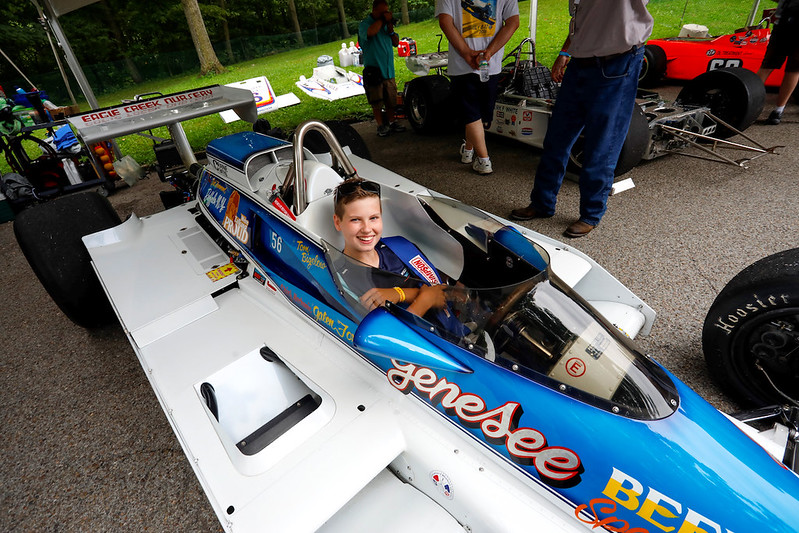 Special Guests
Special guests abounded as Al Unser Jr drove the pace car to lead the cars around the street circuit. Al also served as the PVGP’s Honorary Race Director. Two-time Indy 500 winner Al Unser, Jr., a member of racing’s fastest family, was raised watching his father, Al, Sr., a four-time Indianapolis 500 winner and his Uncle Bobby, a three-time Indy winner. Between them, the Unsers have won the Indianapolis 500 a remarkable nine times. In addition to Al’s two Indy 500 wins, he is a two-time CART champion (1990, 1994), two-time Rolex 24 Hours of Daytona winner (1986, 1987), and two-time IROC champion (1986, 1988). Al has also competed in NASCAR events, including the Daytona 500. Al Unser was thrilled with the PVGP saying  “It’s everything they said it would be and more!” Many thanks to Eric Zagrocki, the PVGP volunteer and executive committee member who managed the Vintage Indy Exhibition. He exclaimed “What a terrific weekend!  Vintage Indy brought in a great group of cars and a fine group of drivers creating new lifetime memories for our fans. I have gone to many vintage race events but never saw an STP Indy Turbine car until seeing it run at Schenley Park.   I will long remember the sound of the turbine and the sight of jet exhaust floating over the grid. It was a privilege to work with Michael Lashmett and Al Unser, Jr.  I had a Walter Mitty moment when Philippe’s Eagle stalled on the grid at the start of Sunday’s session.   Lots of frantic activity as we pushed the car to the side while others ran for the remote starter. I imagined being back at Indy in 1972!  Great stuff!”

PVGP Competition Director John Bechtol spent the weekend in the Indy paddock, taking passengers for a ride in his 1968 Corvette, including Al Unser Jr. explaining “we enjoyed good weather, good people, and great cars. Very happy to have had you and your bunch here in Pittsburgh.  Very gentlemanly drivers and support staff. Great fun!” Many thanks to Brian Hart for his great photography.